On Saturday’s final against Naomi Osaka, Serena Williams was called out for three infractions, splitting public opinion on how she was treated and if the chair umpire Carlos Ramos was correct. Who was right?

A week after the final, the public is still discussing one of the most bizarre women’s finals to transpire at the U.S Open, where Serena Williams received three infractions for illegal coaching (the warning), racquet abuse (point penalty), and finally umpire abuse (game penalty).

The game penalty came during the pivotal second set, where her opponent Naomi Osaka was leading and while Williams called in USTA officials over her spat with umpire Ramos—a veteran on the umpire circuit—the young Japanese sensation was able to easily win the final set.

Some agreed that Serena was a victim of sexism

The partisan crowd clearly wanted the 23-time slam champ to collect her 24th grand slam—one year after giving birth to baby Olympia—and felt incensed by Ramos’ quick decisions to punish the legend. What many of them focused on was the first infraction for coaching, which many found excessive. Several of Williams’ celebrity acquaintances, fans, and tennis legends leapt to the American’s defense when it happened.

Legend Billie Jean King said a double standard was applied to Serena and penned a piece in The Washington Post about it afterwards, placing the majority of blame on Ramos.

Billie Jean King(2/2) When a woman is emotional, she’s “hysterical” and she’s penalized for it. When a man does the same, he’s “outspoken” & and there are no repercussions. Thank you, @serenawilliams, for calling out this double standard. More voices are needed to do the same.

The WTA backed Williams in her sexism claims as well.

Others called out Serena for her behavior

But legend Martina Navratilova wrote a piece for The New York Times, saying that just because the men do it, doesn’t mean it’s right.

The Guardian’s tennis reporter, Kevin Mitchell, said that although tennis has not always been fair to women in the past, he said that Serena was fully “guilty” of bad behavior—citing other male players who have displayed a similar meltdown.

Other players, correspondents, and officials in the sport have condemned Williams’ excuses and labeled her just a “sore loser,” including most recently Barbara Strykova, who called Serena’s ‘sexism’ explanation “bulls–t.”

Correspondent Mary Carillo also said Serena can sometimes be a “bully” and that she was “out of line” on Saturday.

What do other umpires think?

Ramos has a reputation of “being firm, but fair.” Ramos is a well-respected umpire who has been chairing grand slam matches for decades.

“He’s experienced, qualified and did everything right. To press forward that he was sexist I don’t think is appropriate,” said Francesco Ricci Bitti, president of the International Tennis Federation (ITF) from 1999 to 2015.

“This was a story of bad control by a great champion, perhaps the greatest in the world,” he added. “But Serena showed weaknesses. She’s not a good loser.”

The ITF also support Ramos in the dispute.

Apparently Ramos received an apology from USTA President Katrina Adams as well. She also said both parties could have made different decisions at the time.

Several umpires thought Ramos “was ‘“thrown to the wolves for simply doing his job and was not willing to be abused for it,”’ according to People, and are considering a boycott of her future matches.

But do the stats back up Williams’ claim that women are made an example of in tennis? Of all the sports, tennis is one of the most equal. Parity in pay between men and women in tennis is about as good as it gets, thanks to pioneers like King, who fought for equal pay a long time ago. When you look at sports such as golf and basketball, they don’t even come close to the lucrative compensation female tennis players receive.

Sexism exists, it sure does, but tennis is one of the least sexist sports there is compared to the rest. The application of code violations is the same, men receive three times as many violations as women. 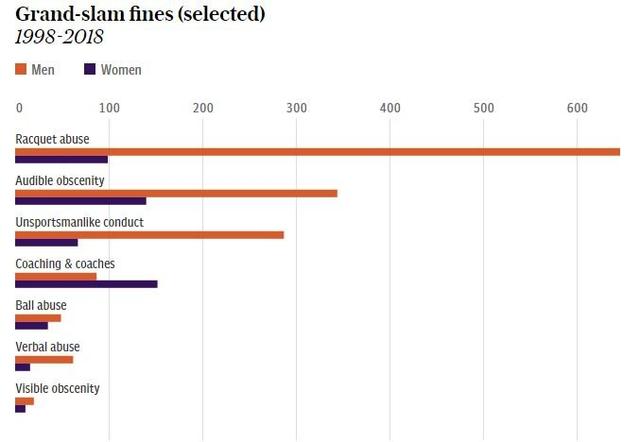 When a woman behaves badly, she can always invoke gender victimology. The tennis player Serena Williams was angry for not winning a game, break the racket and accused the judge without evidence of not being so severe with males. #checkingfeministdata https://www.newsday.com/opinion/columnists/cathy-young/serena-williams-u-s-open-1.20931815 …

So what was the row on Saturday really about?

Williams claimed she had to deal with being made an example of a lot at the U.S. Open, compared to the other slams. The GOAT does have a history at the Open, much of which can be traced back to a 2009 incident in a Kim Clijsters match, where she threatened a lineswoman, “I’m going to shove this (expletive) ball down your (expletive) throat,” said Magdi Somat, a former umpire, according to USA Today.

To her credit, Williams apologized to the lineswoman and took full responsibility for her behavior during that incident, at which time she was also fined. But it seems that the American player has a reputation among the umpires, according to a few of them quoted in the same USA Today article, and that Ramos was trying to avoid a very bad situation by aggressively trying to control an escalating scenario.

During their altercation, Serena told Ramos, “You will never do another one of my matches,” according to The Guardian, and perhaps the 36 year-old Williams is right.

One of the most interesting latest developments in this saga is that it is very likely that Serena Williams and Carlos Ramos will not be dealing with each other anytime soon. Ramos doesn’t chair WTA events and it’s likely that he will recuse himself from her matches at their next potential encounter at the Australian Open, according to The Guardian.

In the meantime, Carlos Ramos is back at work, chairing the Davis Cup finals, and Serena Williams is busy with events regarding her fashion line.

“I’m just focusing on this tie and working again. That’s all I can say,” Ramos told The Associated Press at the Davis Cup matches between Croatia and USA.

Ms. Williams was in Las Vegas for her fashion line, and avoided questions about the contentious final, but did say to the convention audience, “I feel it’s really important to stand up for what you believe in,” Williams said, “especially if it can affect the future and affect a lot of people in the future. That’s what it’s all about.”

Did the decisions made by Ramos affect the outcome of the match? A big resounding no, Serena would have lost to Naomi Osaka anyway. Osaka is a rising star on the tennis circuit, and I think the biggest tragedy of all the drama that unfolded on Saturday was the limelight was taken away from the next generation of tennis females who made their mark, in the form of sensational talent Osaka.

The headlines should have been about her historic win—the first Japanese player to win, and at such a young age, 20. To Serena’s credit, she steered the attention back to the young woman during the award ceremony.

Osaka also has no hard feelings towards Serena and has just landed a major endorsement deal with Nissan. If that isn’t winning, I don’t know what is.